11 Dec 2020 With the deforestation of the amazon rainforest surging, investors and governments make pressure to stop it

Posted at 12:50h in Climate change, Deforestation by Federica Caruso

Earlier this month, the Brazil space agency has disclosed that in the last year the Amazon forest has reported the biggest deforestation scale since 2008 in terms of square km of forest loss. Environmental activists, investors and governments are raising their voices to ask for more actions from Bolsonaro, who has severely weakened environmental regulations in the two years, in favor of mere economic exploitation of the forest.

Recently released data on satellite monitoring of the Amazon rainforest has shown a surge in illegal deforestation since the beginning of Bolsonaro’s administration in 2018. Government data showed that the scale of deforestation surged to a 12-year high in 2020. Only in October 2020, the deforestation rate has increased by 50%, with fires having doubled with respect to the same month last year.

However, ironically, while the total size of deforestation that happened this year was a 12-year high, federal officials praised the growth rate figure of 9.5% as progress, as it is significantly lower than the 34% considerable increase registered in 2019 (See graph below)..

Regarding the Amazon rainforest, Bolsonaro’s administration has weakened the environmental enforcement agency Ibama power and called for more commercial farming and mining that in his opinion would serve to reduce poverty. According to environmental activists, Bolsonaro asked illegal ranchers, miners and land grabbers to “clear the forest”.

Bolsonaro’s plan and rhetoric against environmentalists have worked and has been coupled with accusation to indigenous people who he described to be “mainly responsible for the forest fires”, making Brazil a victim of a strong disinformation campaign. 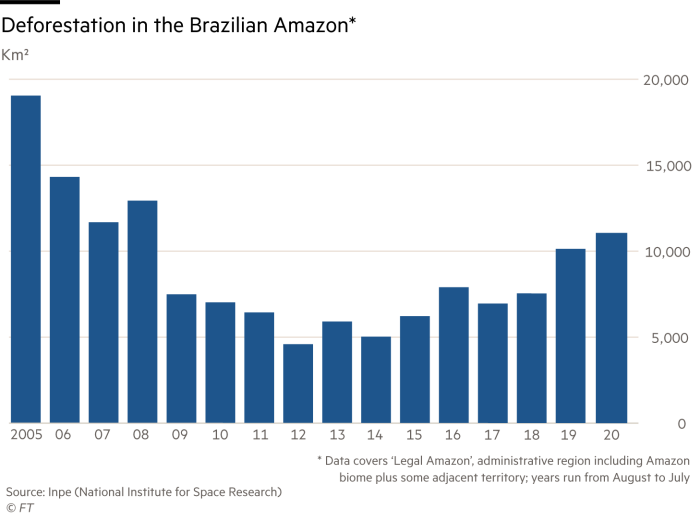 Rising concerns about the deforestation growth rate have led to growing international pressure on the Brazilian President. The French President, Macron, has highly criticized Brazil for not doing enough to save the rainforest and cited this controversy as a reason for putting on hold the trade deal between the EU and Mercosur, the South American block which includes Brazil.

The newly elected US President, Biden, last September promised $20 billion in funds to stop Brazil’s deforestation activities in the Amazon, adding that if Brazil fails to do its part, it “would suffer significant economic consequences”.

In the last years, Brazil has witnessed a greater awareness among companies and investors of the need to improve disclosure and accountability to ESG criteria, as reported also in our previous article (http://en.sustainablevalueinvestors.com/2020/08/12/local-and-international-investors-and-authorities-are-pressuring-bolsonaro-to-fight-deforestation/). The apparel and footwear company VF Corp. – the owner of Timberland, Vans and North Face— has joined the choir of companies boycotting the country and stopped using Brazilian leather last year in protest over the destruction of the Amazon rainforest

According to what the FT reports, one of the ambassadors who participated in a governmental tour of the Amazon that took place last month said that: “Since June we have seen a change of tone in the government […]  Criticisms by investors and the private sector have had an economic impact. They did not expect that. They ignore what NGOs say but when a private business says there is a problem, they go quiet and listen.” However, a lot of work has still to be done.

As investors and private companies (concerned with the reputational risk in their supply chain) take a stand to request more action to save the Amazon, Bolsonaro’s blindness to environmental concerns and his sole interest in making the most money out of the exploitation of the rainforest will lead to more divestments.

According to the words reported by the FT, the former head of the Brazilian Central Bank, Ilan Goldfajn, commented: “I’m impressed by the companies […] by the way we are all thinking in Brazil in the private sector […] But the main challenge has to do with having a macro framework and we cannot avoid having the government involved in that. The government has to embrace sustainability.”