Posted at 11:18h in ESG by Federica Caruso

Lebanon’s economic downfall has had a devastating effect on the healthcare sector, which has been witnessing a steep shortage of medicines following the Banque du Liban’s decision to lift subsidies on medicines, amid shortage of foreign currency reserves in the country. Urgent measures are needed to tackle the healthcare crisis, providing immediate relief to an already strained system. 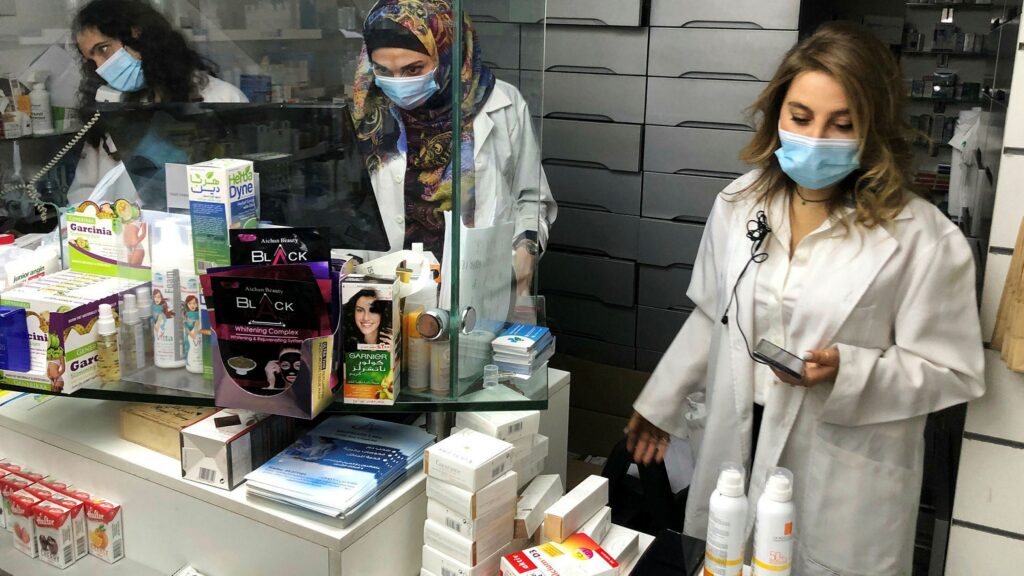 A pharmacist in her shop in Beirut: the most basic of medicines are running short © Issam Abdallah/Reuters

The shortage of drugs and medicines is only the latest consequence of the worst economic crisis of Lebanon’s history: the struggle faced by the Lebanese patients in acquiring vital medicines starkly illustrates the severity of this crisis. Every pharmacy is out of stock and they grapple with a daily moral dilemma of whether to sell the declining supplies of vital medicines to long-term clients or to new customers who might be stockpiling them ahead of shortfalls. Those who have the financial means have stockpiled their requirements for a year, according to the head of Syndicate of Pharmaceutical Importers, Karim Gebara. The unions representing pharmacists, physicians and pharmaceutical importers in Lebanon have since put a one-month cap on the prescription, purchase and delivery of medicine.

The shortages come as Lebanon endures its worst economic crisis in 30 years, coping with hyperinflation, a plunging currency and soaring unemployment and poverty. On the political side, rival parties are failing to agree on forming a new government, leading to a situation of high political uncertainty. Banque du Liban, faced with a shortage of foreign exchange reserves, expects lifting the subsidies within one or two months. It has prioritized allocating dollars at an official exchange rate to importers in sectors such as medicine, fuel and food, so as to avert the soaring inflation for essential goods.

In recent weeks, the health ministry, Dr. Hazan, asked pharmacists to limit the quantity of drugs they sell to customers in an effort to stem panic buying, triggered by a Central Bank warning on an expected shortage of hard currency for vital imports, including medicine, by year’s end. He also recently closed a series of drug warehouses and pharmacies involved in smuggling medicines to foreign countries, closing them with red wax. According to Dr. Hazan this was a key step for eradicating the pharmaceutical mafia and its related smuggling of medical drugs, born following favorable exchange rates offered to importers by the Central Bank as well as lax purchasing rules to sell the drugs abroad for profit.

Signs are appearing that the shortages are hurting those with chronic illnesses. Beirut’s largest public health institutions recently stated that because of a shortage of certain medications, they are experiencing a worsening of heart failure symptoms. The same goes for cancer patients, who are not getting access to Tamoxifen, for instance. Shasha, a cardiologist, points to the danger that patients who need these drugs for days will stop taking them to acute lung crisis and congestion. These drugs are cheap, which means they should be easier than others in terms of securing importing companies the bill for their import. The loss of these medicines has prompted some doctors and observers to talk about an intended halt by some importers from importing them because they are cheap, thus not profitable to merchants. The head of the Pharmacists Syndicate, Al-Amin, denied this matter, reminding that Lebanon doesn’t import enough generics and that the adoption of generics in drug policy takes years. According to Al-Amin, the interruption of drugs, in addition to the delay of CB’s approval of the appropriations, is also due to the scarcity of the dollar.

Concluding, medical professionals are calling for urgent measures to tackle the immediate crisis, especially to reduce the financial strain on hospitals, as well as hospitalization costs. A dual-track plan has been highly recommended, with immediate measures to tackle both the short-term urgency and a medium/long-effort to address the structural issues of the healthcare sector. Efforts are needed to support healthcare providers and to face the challenges of the pharmaceutical and medical supplies industry. These could include direct and indirect monetary support, provided they support the industry while maintaining the quality of products and services. However, Lebanon is facing a high degree of political and regulatory risk, and is no longer receiving the level of remittances that kept its economy afloat. What is clear is that patients are paying the price of bad governance and corruption, and immediate action should be taken to tackle the crisis.