14 Oct 2020 China is opening to Wall Street and its European counterparts: which are the major challenges?

As the China-US trade war drags along with increasing Sino-American tensions, China has not ceased opening up various markets. Why is the opening of the financial industry in China important for foreign players? Is the liberalization a concession made by China in the trade war or a stimulus for the economy cushioning a slowdown? Does the opening come with challenges for Wall Street and its European counterparts? We wonder how far a business can go, without considering the respect of human rights in the locations in which it operates. What about a possible breach of the human rights policies adopted by these financial institutions?

As the China-US trade war drags along with increasing Sino-American tensions, China has not ceased opening up various markets. In Premier Li Keqiang’s Government Policy Address 2019, the signal of an all-round opening up was released.  In April 2018, swiftly after Trump’s announcement of the 25% tariff increase, China lifted the restrictions on foreign shareholding in the auto industry. With the advent of 2021, the highly regulated telecommunications and financial industries are also opening their doors.

Why is the opening of the financial industry in China important for foreign players? Bloomberg Intelligence estimates that foreign banks and securities companies could be earning US$9 billion a year in China by 2030, excluding a major economic slowdown. Wealth management firms are dealing with a market that is poised to reach US$30 trillion in assets by 2023, according to Oliver Wyman. As of May 2019, foreign investors held only 1.6% of banking assets and 5.8% of the insurance market. This is expected to change drastically with the opening up of China’s US$21 trillion capital markets and then the US$45 trillion financial services market. 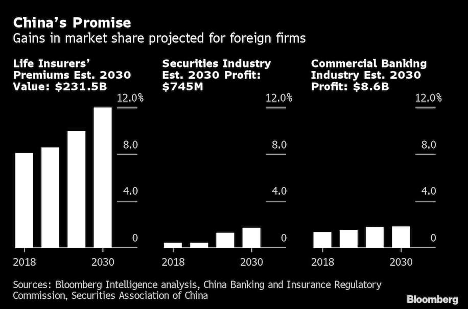 Wall Street’s giants and European Bulge Bracket banks have long been present in mainland China. However, they have had limited and restricted permission to fully operate. Having had to operate through joint ventures with local partners, the permission to obtain full ownership now will allow them to take majority control over their businesses. JP Morgan is estimated to spend $1 billion to gain control over China International Fund Management with a 33% premium. Goldman Sachs, Morgan Stanley, and Credit Suisse have also received regulatory approval for similar take-overs. As a result, many observers claim Wall Street is the biggest beneficiary in the trade war. In fact, this opening is one of the predominant consequences of the ‘Phase One’ trade deal with many viewing such an opening as a concession made by China.

However, this liberalization of the financial market is also seen as a stimulus for the mainland economy. Considering the continuous slowdown of growth with increasing pressure from the trade war, many suspect the opening serves the purpose of stimulating growth, an opinion illustrated by both AFP and Forbes. With the opening, China is expecting US$1 trillion in fresh capital to be poured into the nation by foreign financial firms, cushioning a slowdown. Chinese leaders have openly described such moves as a means to improve the competitiveness of the domestic industry as well as allocate capital more efficiently and attract more foreign investment.

The opening does not come without potential traps or risks. The first predominant factor is the opaque and oftentimes precarious political landscape. China’s capital markets are regarded as highly different from its global counterpart with the later aiming to achieve efficient outcomes through the generation of private profits with constraining state power. The full takeover of China Baoshang Bank by the government serves as a quintessential example of how political factors can cause financial turbulence. President Xi has stressed repeatedly the importance of “financial sovereignty” even amid market opening.  As one Chinese broker stated:“[While] the regulations have been changing in the last two years, what is not changing is the infrastructure…Yes, the regulation is seemingly becoming more international, [but] they will never change the infrastructure because this is where they can exercise the power“.

The challenges are not just coming from the political uncertainties. Other hidden barriers include an existing market hugely dominated by government-controlled rivals that have longstanding and intricate relationships with clients. Capital control is another critical concern. While it is now easier for investors to spend their dollars for investments denominated by RMB, they may be unable to repatriate their money due to the tight and potentially even tightened capital controls. The threat of heightening decoupling pressure also puts investors on tenterhooks, as the financial markets could be the next battlefield in the wrestling of the two giant powers. Last but not least, there is a certain time correlation with the political crackdown on Hong Kong and ‘having friends on Wall St will be a soft-power relaxant of geopolitical tensions’ for China, as stated by FT editorialist Patrick Jenkins in his review as of October 12th, 2020. It is not to be excluded that they can be used as hostages in the future. From SVI’s point of view, it remains to be discussed whether this is not in breach of human rights policies and how far a business can go, without considering the basic respect of human rights in the locations in which it operates.

To read more about this topic, see the following: