Posted at 09:07h in Disinvestment, ESG, Food and beverage by Federica Caruso

The plant-based meat alternatives market is on a continuous rise. VC investment in bio-engineered foods has rocketed in the past 10 years and the trend is likely to continue with investors coming after bioengineered food start-ups in droves. Environmentalists are now pointing fingers at the emissions-heavy meat and dairy industries since their agelong criticism towards the fossil fuel industry started to pay off. A trend of divestment from the sector has also been noticed. Are meat and dairy industries the next coal industry?

Nowadays, when looking for information online about the meat and dairy industries, or reading relevant news, a few keywords are oftentimes associated including “devastating”, “shocking”, “dire”, all of which used to describe the impact on the environment by these industries. In fact, since a consensus has been reached regarding the fossil fuel industry and active actions have been taken in reducing related emissions from all sectors, environmentalists are now pointing fingers at the emissions-heavy meat and dairy industries instead.

The world now produces more than four times the quantity of meat as it did fifty years ago, which has a significant impact on global carbon emissions. In fact, the food system is estimated to account for up to 37% percent of global emissions. Considering only the global processed meat sector, the volume is enormous with a total value of 665 billion U.S. dollars as in 2019 and was forecast to increase to 1,327 billion by 2025. However, a pressing question arises — are environmental risks priced in the financial markets for these companies? 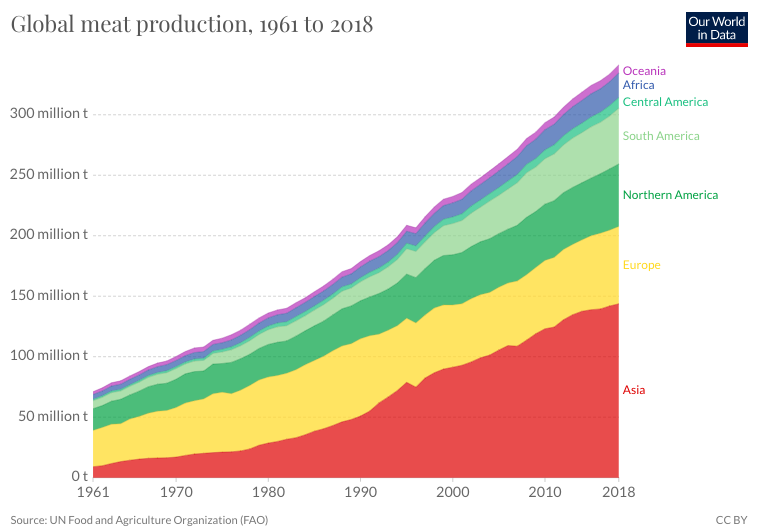 The answer is likely to be negative. “At some point, those companies will no longer generate any revenue due to ecological limits,” said Mark Campanale, founder of Carbon tracker. Data from Arisaig Partners, an emerging markets investor, suggested that operating profits at the average listed emerging market dairy company would be halved if it had to pay a carbon price, with some ceasing to make a profit. Pricing carbon emissions would undoubtedly serve as a heavy blow for the meat and dairy industries and their investors, however, when would this happen at scale?

The shift has already started. Arisaig Partners started divesting from dairy companies after considering the impact of possible carbon pricing. Nordea Asset Management announced divestment of €40m in Brazil’s JBS, the world’s largest meat company by processing volume. Deutsche Bank claimed that they are in the process of developing methods to measure and manage climate risk and have processes in place to monitor their credit exposure. Barclays, the second-largest creditor to the meat and dairy industries, said a firm-wide commitment has been made to align their financing portfolio to the goals of the Paris Agreement. Considering that carbon pricing is a widely adopted tool by governments to help meet the Paris goals on emissions reductions, the trend is likely to continue and even spread further.

On the other hand, a shifting consumer trend that favors the vegetable-based proteins increasingly is likely to naturally decrease creditors’ exposure to the meat and dairy industries. Growth of plant-based protein and meat alternatives is projected to increase from $4.6 billion in 2018 to $85 billion in 2030, according to UBS.

Impossible Foods, a plant-based meat company, is now worth around $4.8 billion. Less than a decade ago, the situation was drastically different with the company struggling to find investment. Beyond Meat, a close competitor of Impossible, has quintupled in value since an IPO last year and now commands a $9.6 billion market capitalization. VC investment in bio-engineered foods has rocketed in the past 10 years and the trend is likely to continue with investors coming after bioengineered food start-ups in droves.

The influx of investors has a grounded reason considering the plant-based meat alternatives market is projected with 15.8% annual growth until 2027, according to a Polaris Market Research analysis. However, so far, these companies are still struggling to break even. Beyond Meat reported a net loss of $10.2m in the second quarter of this year. Yet, investors are not hesitating. Investors directed more money to this sector in the six months to June than they did in all of 2019, according to PitchBook. The sector is likely to raise more than $3bn this year. The worldwide pandemic has likely heightened the trend with an increasing awareness of the food supply chain.

Environmentalists have been urging the need to divest from the traditional meat and dairy industries, claiming that funding has only led to greenwashing. However, divesting without a credible substitute could turn an environmental issue into a social issue, claimed by Marisa Drew, chief sustainability officer at Credit Suisse. Massive divestments could also negatively impact thousands of farmers. Moreover, with an increasing proportion of the middle-class in the global population, the global meat sector is predicted to grow together with its alternatives. Considering its volume and increasing demand, speaking of stepping towards carbon-neutral without the meat and dairy industries still seems far too unrealistic. Helping high-emissions industries transition quickly towards a more environment-friendly framework while avoiding greenwashing remains a challenging and crucial task.