While the benefit of lithium batteries are well-known (batteries are light, charge fast and are able to store a lot of energy) and used in wide-spread technologies (from electric cars to smartphones), the extracting process is far from being environmental friendly as well as it is a potential threat to local communities. While China is the global leader of the industry, Cornish Lithium is set to revive the mining industry of lithium in the Cornwall region pledging to kickstart the industry in the EU while safeguarding the environment as well.

On a hill above St Austell in Cornwall, south-western region of England, Jeremy Wrathall hunts for lithium. Tipped off by a phone call from a retired member of the British Geological Survey, Mr. Wrathall found lithium with the help of satellite images. He then went on quitting his old investment banker job to form Cornish Lithium. “It was probably the most insane choice I’ve ever made,” he recalled to Financial Times.

Mr Wrathall hunted down archives of long closed Cornish mines, unearthing dusty maps in the basement of the British Geological Survey and from private collections held by local landed estates.
He started to digitise the carefully drawn mining maps from the 19th-century mining boom, when there were over 4,000 mines in Cornwall, to create a three-dimensional map of Cornwall’s riches. Up today, Mr Wrathall has the biggest digital archive of Cornish geology, with 45 terabytes of data. 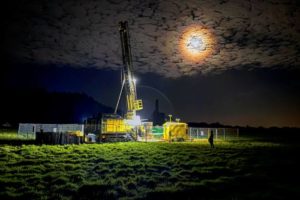 In 2019, he crowdfunded the company online on Crowdcube.com, raising £1.4m. In August 2020, Cornish Lithium said the UK government’s £900m Getting Building Fund, designed to help the economy recover from coronavirus, would help fund a pilot plant to extract lithium from the geothermal waters at the United Downs well run by Geothermal Engineering.

Cornish mining industry, following the closure of the last tin mine in 1998 after four thousand years of extraction, could now prosper if improved digging and extraction technologies are soon to be developed. For instance, Oakland-based Lilac Technologies which received $20m in funding led by the Bill Gates-backed $1bn Breakthrough Energy Ventures in February 2020, uses ion exchange beads placed in tanks that absorb the lithium, which is then flushed out with hydrochloric acid. The technologies are being tried out in the Salton Sea in California, where a number of power stations already generate power from geothermal energy using hot brine that contains lithium.

At the same time, the whole region, one of the UK’s most deprived regions and whose tourism and fishing industries have been hard hit by coronavirus as well as by an uncertain future after Brexit, will benefit from a renewal mining industry.

Adding to that, Simon Moores, managing director of consultancy Benchmark Minerals said to Financial Times that not just one industry would benefit from Mr Wrathall’s Company, but several others like that of automotive, batteries, chemicals and raw materials.

Lithium is found in hot brine which flows through the mineral-rich granite that underlies the whole region. The same brine can also be used to generate low-carbon geothermal energy. The silvery-white metal, also known as white petroleum, reacts violently with water and is so volatile that it is only found in compounds in nature. It is the lightest of all metals, and it was firstly discovered by Johan August Arfwedson, a Swedish chemist, in 1817.Lithium-based batteries are lighter, charge faster and are able to store more energy than traditional ones, making them a strong contender of any primary sources of transportation fuel like gasoline. In addition to that, Mr Wrathall states that its mining plant would be more environmentally friendly than those in Chile, Australia and China, helping to produce batteries with a lower carbon footprint and reducing reliance on overseas supplies.

As of today, extracting and processing lithium is mostly a Chinese affair. In 2019, China produced 79% of the world’s lithium hydroxide, including that from Australian reserves and from the Democratic Republic of Congo, that is used in most electric cars in Europe and the US, but the paradox is that lithium in China is still processed using fossil fuels, such as coal and natural gas, in a process that involves roasting it at 800C.

On the other hand of the planet, in Chile, the extracting process of lithium involves evaporating the brine in vast evaporation ponds, threatening local and indigenous groups’ fragile ecosystem and water supply of the Atacama Desert, one of the world’s driest deserts.

The one-million-dollar question is whether Cornwall’s resources are big enough to sustain a competitive low-cost lithium industry on the scale needed to meet the UK’s expected demand for batteries. Rival company, British lithium is expected to open a conventional open-pit mine in St Austell in 2023.

The Faraday Institution, a UK government-backed body set up in 2017 to promote the battery industry, estimates UK demand for lithium could reach 59,000 tonnes a year of lithium carbonate equivalent by 2035. That’s around a fifth of current global demand for lithium. Cornish Lithium does not disclose how much it thinks it can produce, but one of its competitors, British Lithium, says it could produce around 20,800 tonnes a year of lithium carbonate equivalent.

It is not just Mr. Wrathall’s “insane choice” that energizes the battery ecosystem in “Europe”. Global production is dominated by Japan’s Panasonic, South Korea’s Samsung and CATL and BYD of China. European factories account for only 3% and they are mostly Asian-owned.

In Vasteras, central Sweden, Peter Carlsson’s company Northvolt is building an entire European-owned production line for battery cells to be used in electric vehicles, grid networks and many other areas with a production of about 350 megawatt hours of batteries per year. With €1bn of funding from Volkswagen, Goldman Sachs and Ikea, Northvolt’s Vasteras plant comes after a larger gigafactory in Skelleftea, northern Sweden, entirely owned by Northvolt where production should start in 2021. The plant in Skelleftea is expected to have up to 40 gigawatt hours of capacity by 2024, bigger than Tesla’s gigafactory in Nevada, equating to about 2bn individual battery cells, or enough for about 500,000-600,000 electric vehicles a year. Moreover, the plant’s energy costs are about one-third of China’s because of the cheap supply of hydropower.

Northvolt project perfectly embraces EU’s reinvigorated industrial policy to assert the continent’s technological independence and ensure its economic survival. Such a new industrial policy has to be spearheaded by EU governments and based on a combination of industrial collaboration, publicly funded research, transitory subsidies and global standard setting to encourage a large-scale European value chain, an intelligent reinterpretation of an old-fashioned industrial policy of state-directed investment according to French finance minister Bruno Le Maire, whose motto is “Mobility is a matter of sovereignty”.

Maros Sefcovic, the former EU energy commissioner succeeded by Estonian politician Kadri Simson, lead the EU to the foundation of the European Battery Alliance (EBA), a group comprising EU policymakers and scores of companies with the aim of creating an innovative and competitive “ecosystem” for batteries in Europe.

The French and German governments are pouring taxpayers’ money into two EU battery consortiums. The first, a French-led effort involving seven EU member states and 17 companies, is seeking Brussels’ approval for €1bn of state aid. A second, German-led venture will follow. Both are being organised as Important Projects of Common European Interest, an EU-sanctioned regime that allows exemptions from normal EU state aid and competition rules for multinational projects deemed strategically important.

Whether it is an insane idea from a former investment banker or a well-calibrated and comprehensive industrial policy, these are the right entrepreneurial approaches that build a sustainable and forward looking way of doing business.