The coal industry is likely to never recover from the heavy blow caused by COVID19, experts said. The modern society’s dependence on coal has been cut loose due to the slash in costs of its greener alternatives and heightened climate activism. Pandemic has accelerated the shift of embracing a more ESG friendly agenda in the energy industry and once again, proved renewable energy a safer investment.

As the pandemic drags along, the shutdown of factories, retailers, restaurants, and office buildings has led to a noticeable decline in electricity demand. Coal plants, with a higher cost of operation than natural gas plants or renewables, have been cut first in response. Some experts even say that this heavy blow is likely to have a profound impact on the coal industry. Rob Jackson, the chair of Global Carbon Project, said the coal industry will never recover, even with a continued build-out in India and elsewhere.

By May, the UK national grid had not burned a single lump of coal for 35 days in a row, the longest uninterrupted period since the advent of the industrial revolution. This drastic decline in our modern society’s dependence on coal was unthinkable a decade ago. The tie is cutting loose. Dominion Energy, one of America’s largest utilities, is aiming to be carbon neutral by 2050, said CEO Tom Farrell. Furthermore, their current 5% of electricity supplies from renewables is rocketing to 30% by 2035. With almost half of all electricity coming from zero-carbon sources at the present, this is expected to grow to 70% by 2035. This shift is not unique to this Virginia-based utility company. In April, Longview Power, which operates one of the nation’s youngest and most advanced coal power plants, filed for bankruptcy protection, citing the pandemic as a factor. In fact, albeit the presence of weakening pollution rules on coal plants by Trump’s administration, the United States is producing more electricity this year from renewable energy than from coal for the first time in history. Around the same time in Sweden, the last coal-fired power plant in the country closed down. Austria followed suit with the shutdown of its only remaining coal plant at Mellach. Even in India – the world’s second-largest coal consumer – the government has prioritized cheap solar energy rather than coal leading to the first year-on-year fall in carbon emissions in four decades.

Even in the coal industry, the green trend seems to become dominant. One predominant reason is deeply rooted in cost efficiency. Five years ago, Dominion embraced solar energy, and according to Tom Farrell, this was because solar was finally cost-effective. Accompanying the drastic change in our dependence on coal is the changing economics of renewables. Wind energy prices are at historical lows. After peaking at 7 cents per kWh in 2009, the average levelised long-term price of wind power has dropped to less than 2 cents. Nevertheless, the cost of building large wind farms has declined by more than 40%. Solar prices have also plunged precipitously. New PV projects will have “significantly lower costs” than the average cost in 2019, says a report by the International Renewable Energy Agency (IRENA). For the utility-scale generation, the cost of PV is expected to fall to $39/MWh, which is cheaper than the marginal operating costs of existing coal plants, mounting up the risk of an increasing pool of stranded assets. 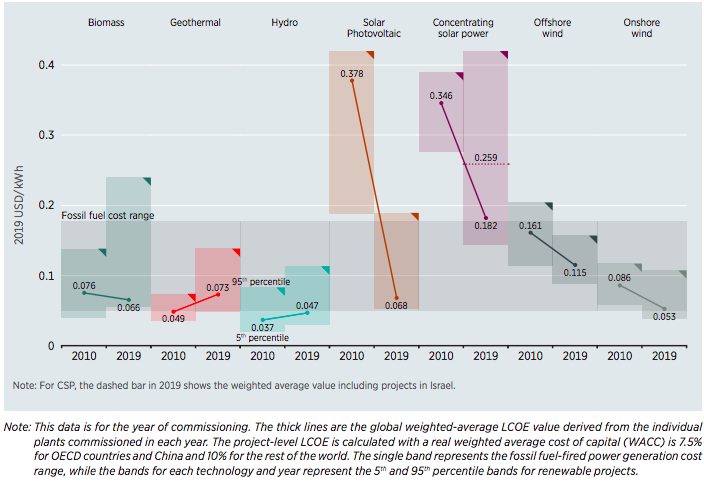 While carbon is bowing out, natural gas, a cleaner alternative of coal, will remain a core feature of the operation. According to Tom Farrell, the renewable sources are not able to run a modern economy yet with the current technology in battery storage. However, with the crashing oil prices worldwide due to the coronavirus, many oil drillers are being forced to shut down their wells which could lead to potentially higher gas prices next year and the recovering of coal.

Yet, not just record-setting low costs of cleaner alternatives that help undercut the coal business. Though the pandemic has once again proved renewable energy is now a safer investment, long before the pandemic outbreak, the traditional coal industry was under strong backlash and pressure due to heightened climate activism, divestment campaigns, and low-cost alternatives. The pandemic has undoubtedly accelerated the process while wiping billions from the market valuations of the coal and mining industry. Utilities and large technology companies are favoring wind and solar farms for their sources of power increasingly. While lower costs serve as a primary reason, the pressure from shareholders, increasing risks of stranded assets, and the genuine conviction all contribute to the shift of embracing a more ESG friendly agenda.