The 2020 Global Forest Resources Assessment informs us about a consistently declining rate of deforestation, to be explained by diminishing deforestation coupled with natural forests expansion and afforestation. The African continent is however emerging as a key hotspot, and important ecosystems, such as the Congo Basin, are at a high risk of destruction.

Forests serve a multitude of fundamental purposes for human life, from the absorption of carbon dioxide to the regulation of water supply just to name a few. However, unsustainable human development continues to profoundly impact their well-being through both more direct and indirect means. According to the WWF, 20% of the Amazon biome has already been lost, and 2019 has been a particularly devastating year due to fires expanding at an unprecedented rate over more than 3.500 square miles. Even more recently, Australia too suffered from extensive fires that followed a years-long drought and burnt one-fifth of the country’s forests.

Given their vulnerability, forest preservation has been identified as a matter of international relevance and posited at the core of the 2030 UN agenda, which features not only a strong imperative on taking urgent actions in combating climate change and its impacts (SDG 13), but also aims at protecting, restoring and promoting sustainable use of territorial ecosystems, sustainably managing forests, combating desertification, halting and reversing land degradation and halting biodiversity loss (SDG 15). What is also worth underlining however is that the relevance of forests has to be understood also in connection to other goals, as they represent a founding stone for sustainable food production, poverty alleviation, food security, biodiversity conservation, as emphasized by Senior Forestry Officer Anssi Pekkarinen. 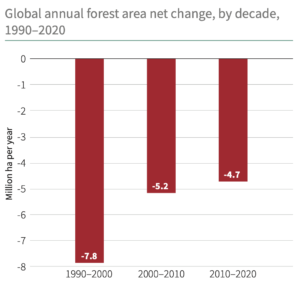 The latest Global Forest Resources Assessment published by the Food and Agriculture Organization (FAO) of the United Nations as of May 7th, 2020 provides us the latest update on forest resources and their condition, management, and uses. Drawing on data from the last 40 years (1990-2020), the report is a helpful performance measurement tool in evaluating goals and targets under the Paris Agreement on climate change, the Global Forest Goals and Targets of the United Nations Strategic Plan for Forests 2017–2030, and valuable setting tool for the forthcoming post-2020 global biodiversity framework and United Nations Decade on Ecosystem Restoration. A new addition to the traditional written report has been the development of The Global Forest Resources Assessment online platform, an easy to use digital software that aims at increasing transparency and fostering the dissemination of information to end-users.

Despite forest areas continue to decrease, the most encouraging finding relates to a consistently declining rate of deforestation (from 7.8 million ha per year in the decade 1990–2000 to 4.7 million ha per year in 2010–2020), to be explained both by a reduction in deforestation itself, but also by the natural expansion of forests and increasing efforts towards afforestation. Delving more into the contribution of macro-areas, Asia and Europe exhibit a positive net contribution to the total forest area, whereas South America (despite its substantial improvement over the last decade) and Africa are those driving global net losses.

As data make clear, despite media tend to commonly circumscribe the issue to the Amazonian forest, a deforestation hotspot has now emerged also in Africa due to both high population growth and small-scale agriculture needed to sustain livelihoods. For instance, it is estimated that the Congo Basin, which contains 20% of the world’s tropical forests and makes up one of the most important wilderness areas left on Earth, is at great risk and up to 30% of its forests will likely disappear by 2030. As weak governance, poor law enforcement, unreliable infrastructure, violent conflicts and the uneven allocation of forest revenues all concur in hampering sustainable forest management, the WWF amongst its commitments mentions the experimentation of innovative financial mechanisms for forest conservation (e.g. conservation concessions, payment for environmental services, etc.) and multi-stakeholder alliances to secure processes that are both transparent and participative.

Even though global forest monitoring capacity is at an all-time high, data have to be leveraged in order to devise adequate measures. Key stakeholders are hence called to urgently take concerted actions in both sustaining the existing trend of declining deforestation and promoting afforestation, forest restoration, and forest conservation, particularly in the context of tropical developing countries.

For further information, refer to the following links: