Today, 29thJuly 2021 we have reached the Earth Overshoot Day (EOD), the calculated illustrative calendar date on which humanity’s resource consumption for the year exceeds Earth’s capacity to regenerate those resources that year. The term “overshoot” represents the level by which human population’s demand overshoots the sustainable amount of biological resources regenerated on Earth.

When viewed through an economic perspective, the annual EOD represents the day by which the planet’s annual regenerative budget is spent, and humanity enters environmental deficit spending.

The date is estimated by dividing the Earth’s biocapacity, thus the amount of ecological assets the planet is able to generate and supply for that year (including forest lands, grazing lands, cropland, fishing grounds, and built-up land), by the humanity’s ecological footprint, which is the population’s demand for ecological resources (such as food, urban space, forests to absorb our emissions of carbon dioxide), and finally multiplying it by the number of days in a year (365), according to the following formula:

Earth Overshoot Day is calculated by Global Footprint Network, an international non-profit and research organization founded in 2003 and focused on sustainability, and it is a campaign supported by dozens of other nonprofit organizations. In 2020 the calculated overshoot day fell on August 22 (more than three weeks later than 2019) due to coronavirus induced lockdowns around the world. The president of the Global Footprint Network claims that the COVID-19 pandemic by itself is one of the manifestations of “ecological imbalance”. This year, given the partial upswing of economic and industrial activities, that same day, in which humanity’s demand for ecological resources and services in a given year exceeds what Earth can regenerate in that year, came about a month before. 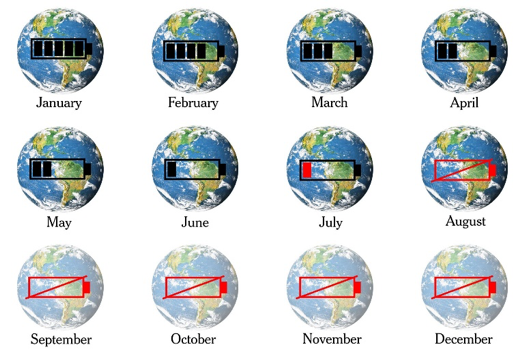 Each year, the date is calculated using ecological footprint and biocapacity estimations “nowcasted” to the current year, using the most updated data available. For this reason, every year the organization recalculates both the metrics used to estimate the Earth Overshoot Day for the past years and the past dates accordingly. 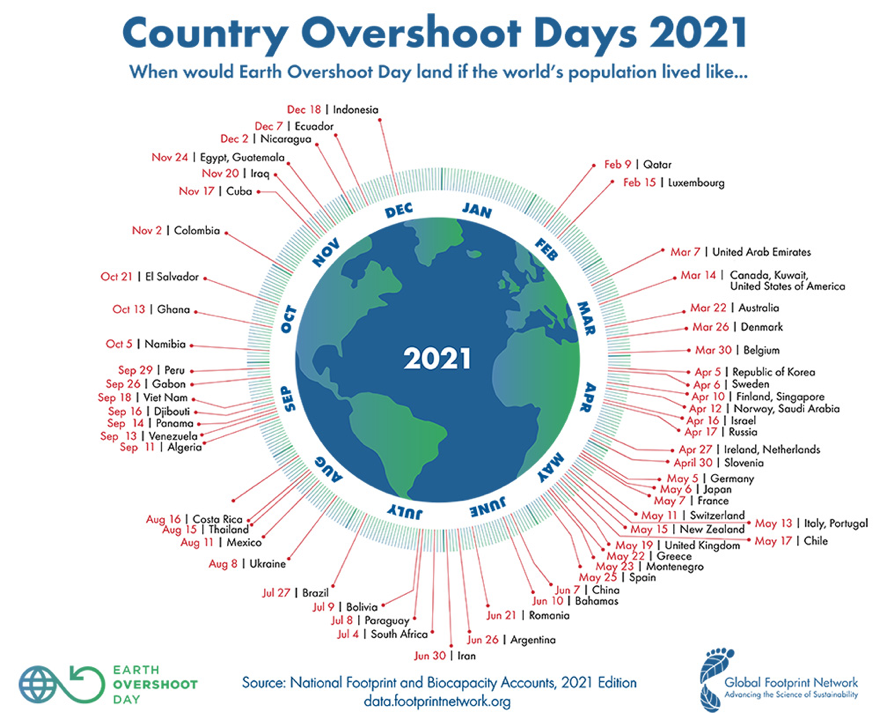 Questions can be raised on the methodology used to determine the date of the Overshoot days as it does not differentiate between sustainable and unsustainable uses of resources, and it does not take into consideration other means of carbon emissions absorption like ocean and soil. However, it remains a tangible and simple tool to show and increase awareness on the human impact on the ecosystem.

As Daniela Carosio, SVI senior partner declared about the Earth Overshot Day of last year: “What can we do? A relevant question we all need to ask ourselves as citizens, consumers, workers, savers, investors, in our daily life as well as when we are on holiday. Everything is tightly interconnected. […] We all need to contribute strategically to reverse the trend and consolidate the nearly a month saved in resources in 2020 versus 2019. This is our commitment also through our ESG and impact investing analysis”.

However, as it has been observed, this year as industrial activities got back about to the previous levels, the EOD came about a month before, hence the correlation between anthropological activities and the depletion of resources is crystal clear.

Furthermore, according to many scientists, the Covid-19 pandemic can be as well considered among the effects of the climate change and of the nowadays ecological imbalances in a broader sense. It is, thus, very important to ascertain the importance of this date not only in the press but in our daily lives, changing our habits for the better without forgetting that our planet, despite the expansionist aims of space colonization of some entrepreneurs of the modern days, still remains one and only.