Posted at 12:19h in Climate change, Companies, Oil and Gas by Federica Caruso

Coal mines, oilfields and gas reserves are increasingly losing their value as tighter regulations aimed at tackling climate change already are and will continue to be put in place. Due to this, oil and gas companies are expected to write-off at least half of the value of their reserves, resulting in what is expected to be the biggest ever shift in capital allocation. It will affect everyone, and above all those companies and economies that have not been able to address their dependency on oil and gas and follow the energy transition.

Once announced government regulations aimed at limiting the temperature increase were to be implemented, in line with the goal set in the Paris Agreement, oil and gas companies would not extract and use their fossil fuel reserves as the latter outweigh carbon reduction targets. Consequently, to meet the global warming target of 2.0°C, energy companies would find themselves in the position to write off 59% of their hydrocarbon assets as stranded assets, i.e. “those investments which have already been made but which, at some time prior to the end of their economic life, are no longer able to earn an economic return”, according to the definition by the International Energy Agency (IEA).

In a tighter scenario, where stricter regulations are put in place to limit the increase in temperature only to 1.5°C above pre-industrial levels, estimations predict a loss of $900bn in the oil and gas industry. With oil and gas companies turning 84% of their reserves in stranded assets. 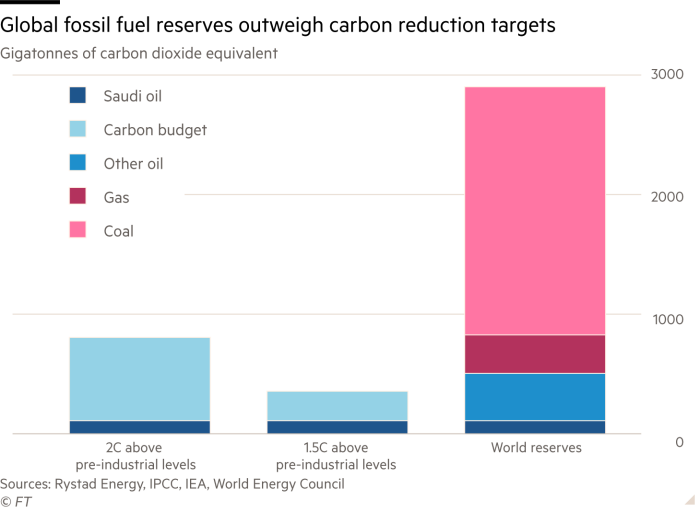 The losing value of fossil fuels has shown already in capital markets, where the stock prices of energy producers focused on coal, oil and gas have reached lower levels than five years ago.

Prompted by such pressure, this year the British oil and gas company BP committed to becoming carbon neutral by 2050 and decided to cut $17.5 billion off the value of its assets, reflecting declining long-term oil price expectations and the transition towards greener energy solutions, fastened also by the advent of the Covid-19 pandemic (read more in our previous post: http://en.sustainablevalueinvestors.com/2020/08/15/investors-demand-corporate-financial-statements-to-incorporate-climate-change-risks/).

Other companies have starting to do the same: Total SE wrote-off around $7bn of Canadian oil sands assets last July, Royal Dutch Shell Plc cut off $4.7bn in assets in North America, Brazil, Europe and Nigeria, Exxon Mobil Corp. stated in August that low energy prices may lead to a loss of one-fifth of the book value of its oil and gas reserves, while Chevron Corp. declared to expecting to reduce reserves value by 10% mostly in US and Australia.

For fossil fuel producers, the energy transition concerns the core of their business strategy. Companies are increasingly either approaching climate issues seriously or lagging behind and, according to a report by Carbon Tracker Initiative, European producers outperforming US competitors in tackling the issue. 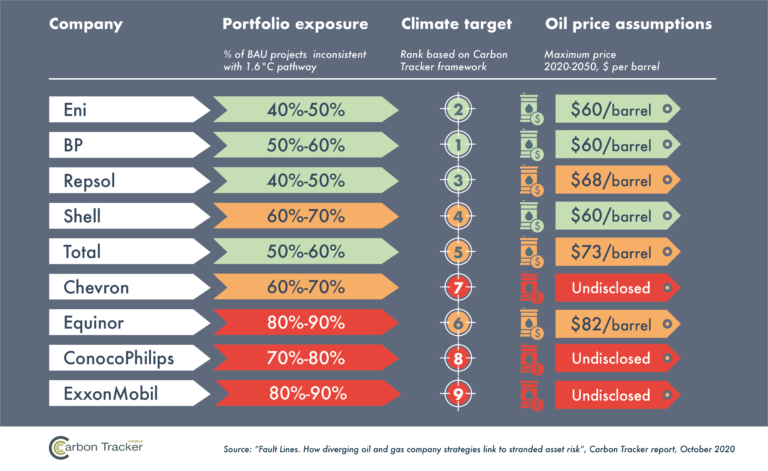 According to the organization, in fact, US companies do not disclose their assumptions on impairment price. Nevertheless, the poor performance on other factors, such as emissions ambitions and scale of CAPEX at risk, suggests that they are assuming long-term high oil and gas prices, further raising the risk of write-downs.

As the FT reports: “The greatest threat is faced by economies that have become dependent on oil and gas. However, the effects of writing off stranded assets would be felt across the business world. It would be one of the biggest ever shifts in the allocation of capital”.

Financial regulators are in fact worried about banks’ exposure to fossil fuels, since they collectively financed oil and gas companies around $650bn in 2018, according to the data provided by the Rainforest Action Network.

Bank stress testing is set to incorporate climate change risks, with some regulators arguing whether changes should be made to bank capital rules, for instance by introducing cuts on regulatory capital risk weightings on greener finance or by raising it on brown finance, so as to incentivize quicker divestment from fossil fuels.

The risks of stranded assets and the effects on the companies as well as on the local community is a topic authentic leadership needs to address at both corporate as well as at the Government level. Much it is discussed of the contribution oil&gas companies can give in improving carbon capture and storage, however, the big question about how to change the revenue business model is inescapable.