12 Aug 2020 Australia’s Snowy Hydro 2.0 and its threat to biodiversity

Posted at 12:16h in Climate change, Renewables by Federica Caruso

Australia’s Snowy Hydro 2.0, a pumped hydro storage project in the Snowy Mountains, has recently been approved by the federal government as an economic savior to bushfire-ravaged region and the COVID19 recession. However, several concerns arise from its economic and environmental costs.

Australia has recently approved Snowy Hydro 2.0 in the list of 24 infrastructure projects aimed at building a way out of the Covid-19 recession, in the Snowy Mountains, one of the most harshly affected areas by the bushfires. Snowy Hydro 2.0 is a 2000 megawatt pumped hydro storage project, a water battery, that backs up intermittent energy from wind and solar, helping to stabilize the electricity systems. Snowy Hydro 2.0 was launched by the newly elected government, who wanted to place the state-owned Snowy Hydro plant, operating since 1974, at the vanguard of another energy transition towards renewable energy.

The century-old technology used is the pumped hydro, which can generate electricity to offset irregular wind and solar power: the excess or cheap power at off-peak times is used to pump water into raised water basins, from where it can be released to generate electricity when demand and prices are highest. With the greater use of renewables, the need for storage is expected to accelerate, thus putting pumped hydro in pole position to remain the backbone of the renewables revolution. In fact, the pumped hydro represents a solution to the provision of constant power, when using intermittent sources such as wind and solar. The shift towards intermittent wind-solar, combined with the weakness in the transmission networks and the lack of storage, have made the power system vulnerable, especially in adverse weather conditions like storms. Snowy 2.0, scheduled to be completed by 2025, will act as a showcase for the technology and encouragement for other nations to begin the shift to a grid totally based on green energy. The advantage of hydro is the fact that it is a renewable energy supply available on demand, as when the market needs electricity, you employ the water you have in the upper storage to drive the turbines in the power station, providing electricity to the market.

According to energy experts, the mix of pumped hydro, lithium-ion batteries, long-distance transmission networks and solar thermal technology will be required to replace fossil fuel generation. Lithium-ion batteries and pumped hydro can be seen as complementary technologies, as the former provides short-term storage solutions over seconds, minutes or few hours, whereas the latter is better for providing larger amounts of storage capacity over much longer periods, up to 70 years. It is likewise important to reinforce the high-voltage transmission network to carry electricity to parts of the energy grid that need it, so as to build more resilience into the grid. 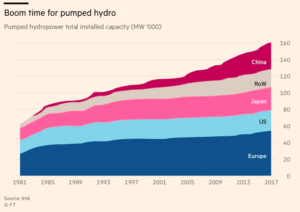 Worldwide, investing in pumped hydro is growing at a rapid rate, especially in China, Spain and US. In UK, investment in pumped storage remains elusive because of a framework that doesn’t adequately value the grid stabilization services provided by technology and the lack of long-term contracts.

In western nations, instead, the investment is slower, as the raising of finance for project is made more difficult by high upfront capital costs, long lead times in construction and difficulty in forecasting future revenues. Moreover, the race to the bottom in terms of electricity pricing, where wind and solar tend to be the cheapest, is creating a barrier to pumped hydro.

Australia has been the scene of a decade-long political battle over energy and climate change policies, and as a matter of fact the project has met a political dilemma, as the current PM Scott Morrison is a strong supporter of coal, which generates 60% of the nation’s electricity, whereas the Labour party has just resumed their green energy targets. However, the conservative government is touting Snowy 2.0 as a savior to bushfire-ravaged region, as the project will allow a couple of thousand extra semi-skilled workers to be employed in the mountains, one of the most affected areas by the bushfires.

However, Snowy 2.0 has raised several environmental concerns, as it has been described as an “act of environmental vandalism” that could harm threatened species, especially the endangered stocky galaxias fish. Linterman, a professor at the University of Canberra, and fish expert has said the government has taken an unprecedented decision to grant an exemption to Snowy Hydro 2.0 from two provisions of the NSW Biosecurity Act designed to prevent the transfer of invasive fish species. The project is estimated to cause permanent damage to Kosciuszko national park, costing about $10bn.

Moreover, some concerns also arise from the lack of market assessment, feasibility study or cost-benefit analysis. Australian newspapers, like The Conversation, have harshly criticized Snowy Hydro 2.0, for its high costs, its environmental and biodiversity impact, and the marginal energy benefits provided. Another newspaper, the Independent, has stated that Snowy 2.0 doesn’t measure up economically or environmentally. In fact, a group of engineers, environmentalists and economists had called for a delay of the final decision on Snowy Hydro 2.0, claiming the costs would not outweigh the benefits, with the risk of building an environmentally destructive project which will prove an infrastructure white elephant, never earning back its cost of capital.